Get to know Nathalie Reynaud and her Domaine l'Abbé Dîne

The Rhône Valley is full of great winegrowers and Nathalie Reynaud, owner of Domaine L’Abbé Dîne is definitely one of them! She started her adventure in 2012, the same year of her daughter’s birth, “an exceptional year it goes without saying”!, and run her vineyard with passion and determination. As she can remember, wine has always been part of her family. She likes to say that her heritage has been transmitted by her grandmother “she made me taste wine as a syrup, blended with water, with bread and chocolate”! 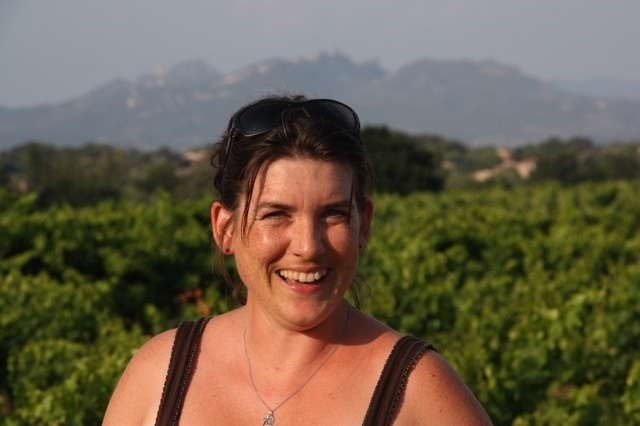 L’Abbé Dîne means The Abbot Dines, why this name? You may ask. To understand it, we have to go back to the time of religious wars when the Protestants hunted Catholics; especially the Vicars who were the main target. At this time, Mass was celebrated in secret, so the Abbot was not aware of it. The nuns had put in place a special trick. When the Protestant wanted to inspect churches, the nuns simply responded to them “The Abbot Dines, do not disturb”. This way the Mass could continue normally. When you translate “The Abbot Dines” to French, it becomes “L’Abbé Dîne”. Though, it’s not the only reason for the Domaine’s name. In Provence, close to the Rhône Valley, the nuns were called the “Bédines”, and it occurs that it is the name of one of the domain’s largest plots! Everything is linked, and that is why Nathalie naturally chose this name as an indelible marker of time and history.

The Domain is located in Courthezon, a small village of the Southern Rhône Valley where the land belongs to her family since 1880. Her vineyard extends onto four emblematic appellations of the region: Châteauneuf-du-Pape, Côtes-du-Rhône-Villages, Côtes-du-Rhône and IGP Vaucluse. Her vines in Châteauneuf-du-Pape and Côtes-du-Rhône Villages are very close to each other as the parcels are only separated by a road. Around sixty plots cover the vineyard. The main one is the “Bédines”, the largest parcel around the Domaine. Another one called “The Bédines Sud”, may ring a bell to you due to its proximity to Château Rayas. Indeed, the vines from this plot are bordering the one of Rayas and are 120 years old! As much to tell you that all the conditions are reunited to make really good wines!

For example, her Châteauneuf du Pape 2018, a majority of Grenache, with a touch of Syrah and Mourvedre issued from sandy soils expresses elegant aromas of raspberries, cherries, liquorice. The wine is juicy and rounded by silky tannins! This vintage has actually attracted some of the well-known critics as Jeb Dunnuck gave her 93 points.

As in the Châteauneuf du Pape 2018, the sandy soils are representative of the Abbé Dîne terroir and will confer finesse to the wines. Then, we can find some pebbles, common of the region, and clay. z

Her vineyard is planted mostly with Grenache (80%) followed by the classic Syrah (10%), Mourvèdre (8%) and Caladoc (2%). All grapes are vinified separately for all the wines. Nathalie uses concrete tanks in majority because it was at the Domaine when she started her activity. Later on, she bought some stainless steel tanks for their neutrality and purity. Today, she uses both methods for her vinification and aging process. All grapes are destemmed, vinified separately and the maceration is around 4 to 6 weeks. The ageing is mainly around one year. For her Châteauneuf-du-Pape 2018, the wine has been aged for nine months in concrete tanks.

Nathalie, in addition to be a wine lover is also a nature lover. In January 2021, the Domaine obtained the HVE (High Environmental Value) certification. The High Environmental Value label is based on indicators measuring the environmental performance of farms around three themes: the preservation of biodiversity (insects, trees, hay, grass strips, flowers, etc.), the phytosanitary strategy, and the irrigation management. The goal is to have very little impact on the environment and work in the respect of the soils, the vines but also manage with care all the work in the cellar.

The Abbé Dîne, is without doubt, a Domaine full of history, traditions, and by her hard work Natalie is trying to give you the best of it. Her work has even pushed Mister Philippe Cambie to join the adventure, a reference in the Rhone world wine, almost inaccessible nowadays, allowing her to understand better her terroir and to gain notoriety in France.

Nathalie and us would be happy to count you as a future friend and partner!