HAVE YOU HEARD OF MASSIF D’UCHAUX ? THE KINGDOM OF DOMAINE CABOTTE!

Nature and its energy are at the center of everything at Domaine la Cabotte. A feeling of serenity takes hold of you as soon as you enter the vineyard, located in Mondragon, in the heart of the Massif d'Uchaux, above Avignon. Let yourself be carried away by Eric and Marie-Pierre Plumet, true actors of the French biodynamics.

The history of the estate began in 1981, when Gabriel d'Ardhuy, owner of the Domaine d'Ardhuy in Burgundy and a great lover of the wines of Provence and the Rhône, was seduced by the charm of the property. He purchased it and entrusted the management to one of his 7 daughters: Marie-Pierre. Partially abandoned, she rehabilitated the estate, which counted about ten hectares at the beginning, and planted 20 more over the years. Her husband Eric joined her on the estate in 1986, and their first bottling took place in 1987. The estate now has 38 hectares and has been farmed in biodynamic agriculture for more than 15 years, with the certification received in 2007. 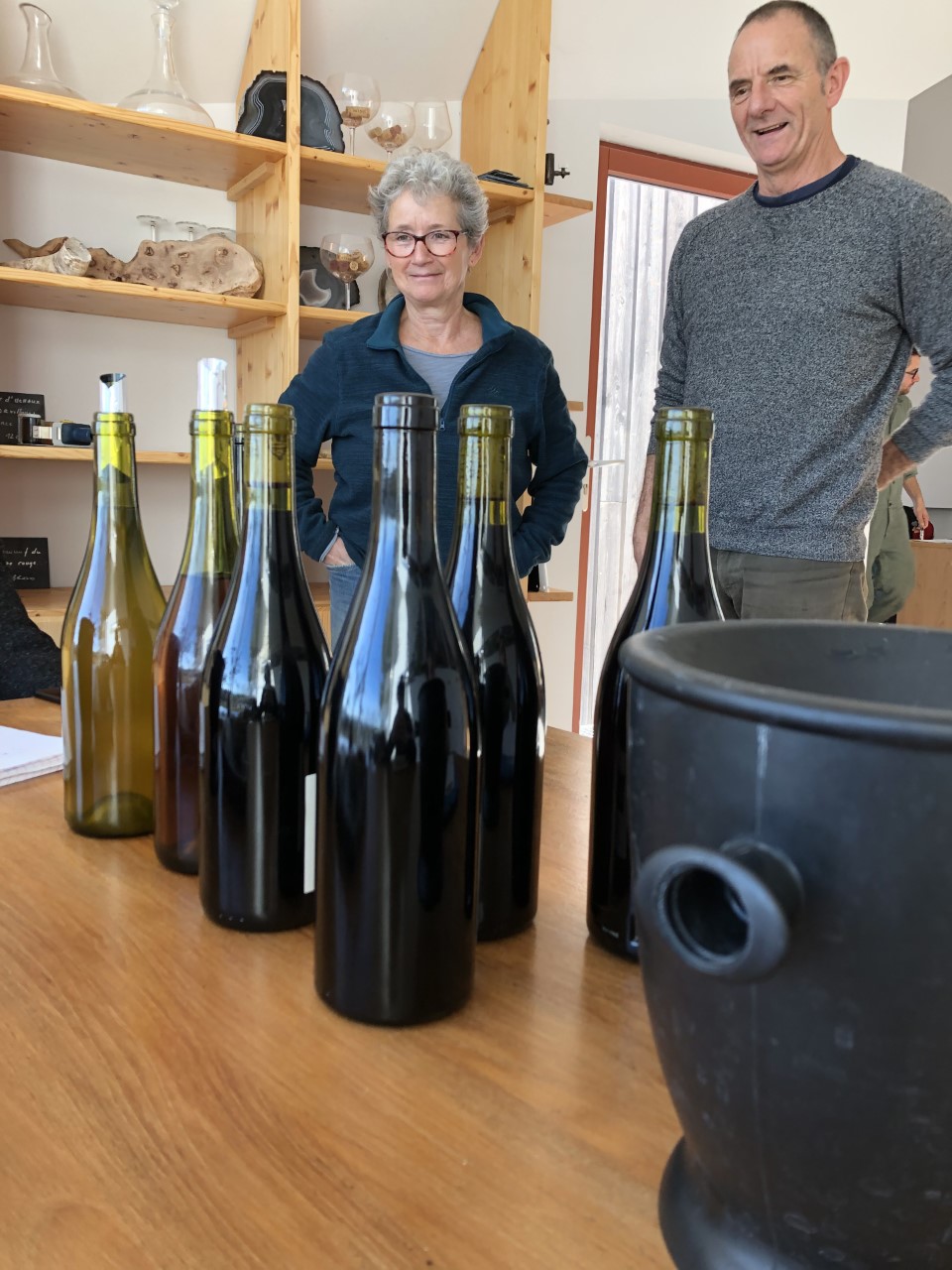 After half an hour's drive, north of Châteauneuf-du-Pape, you take a small winding road that leads you into the** heart of the garrigue and pine trees of the Vaucluse**. While driving, you can catch sight of Eric and Marie-Pierre’s sheeps, that are in the vineyards from December to March. The estate is there, 28 hectares of a single block, where you follow a dirt road that takes you to a hut at its end.

This small dry-stone made hut, which was once used to store the farm equipment when everything could not be moved due to lack of transportation (cars or horses), but also to shelter and keep you warm during the rough season, is frequently found on farmland. Called "borie" or "capitelle" in Languedoc, it is called "cabotte" in Burgundy: hence the name of the domain, because of its Burgundian owner. 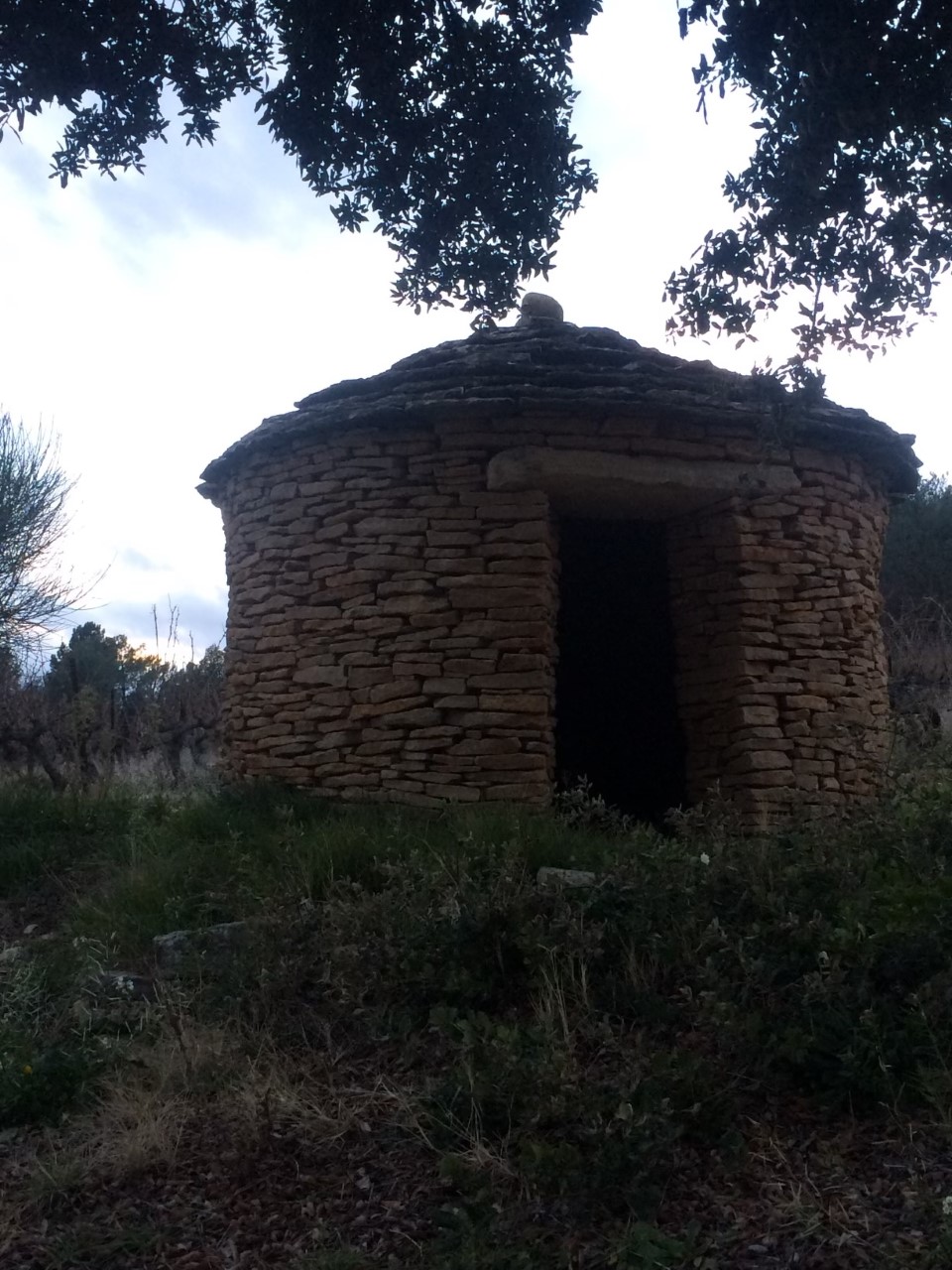 The vineyard in its entirety represents now 38 hectares, and stretches over several appellations : the well-known Châteauneuf-du-Pape, which no longer needs to be presented, Côtes-du-Rhône, as well as a specific village appellation, Côtes-du-Rhône Massif d'Uchaux. The originality of this place lies in its terroir:** the vines are directly on the bedrock,** composed of red sandstone soils which are enriched with silico-limestone elements. These are old and poor soils, dating from the secondary era. It is the only terroir in the Rhone Valley that does not have elements dating from the Tertiary era, which gives a particular characteristic to the wines: they are fruity wines, very tense, with structure. It is also a very wooded massif, which competes with the vines, and therefore limits the yield.

During your visit to Domaine La Cabotte, it will not be long before Eric mentions biodynamics: very attached to their terroirs,** the Plumets have made biodynamics an art of living**, and go further in their approach. The domain is the first to be certified biodynamic in the small region of the Massif d'Uchaux, and it remains one of the only ones in the Vaucluse region. Eric is a instructor: he hosts and leads training sessions on biodynamics, with the aim of helping other winemakers convinced by this way of working.

Eric and Marie-Pierre own 4 dynamizers, and make their own biodynamic preparations: they have created an association with 30 other winemakers to make their preparations together, and are biodynamic trainers, as well as a training center. Eric told us that he is very proud to be the spark of all this. 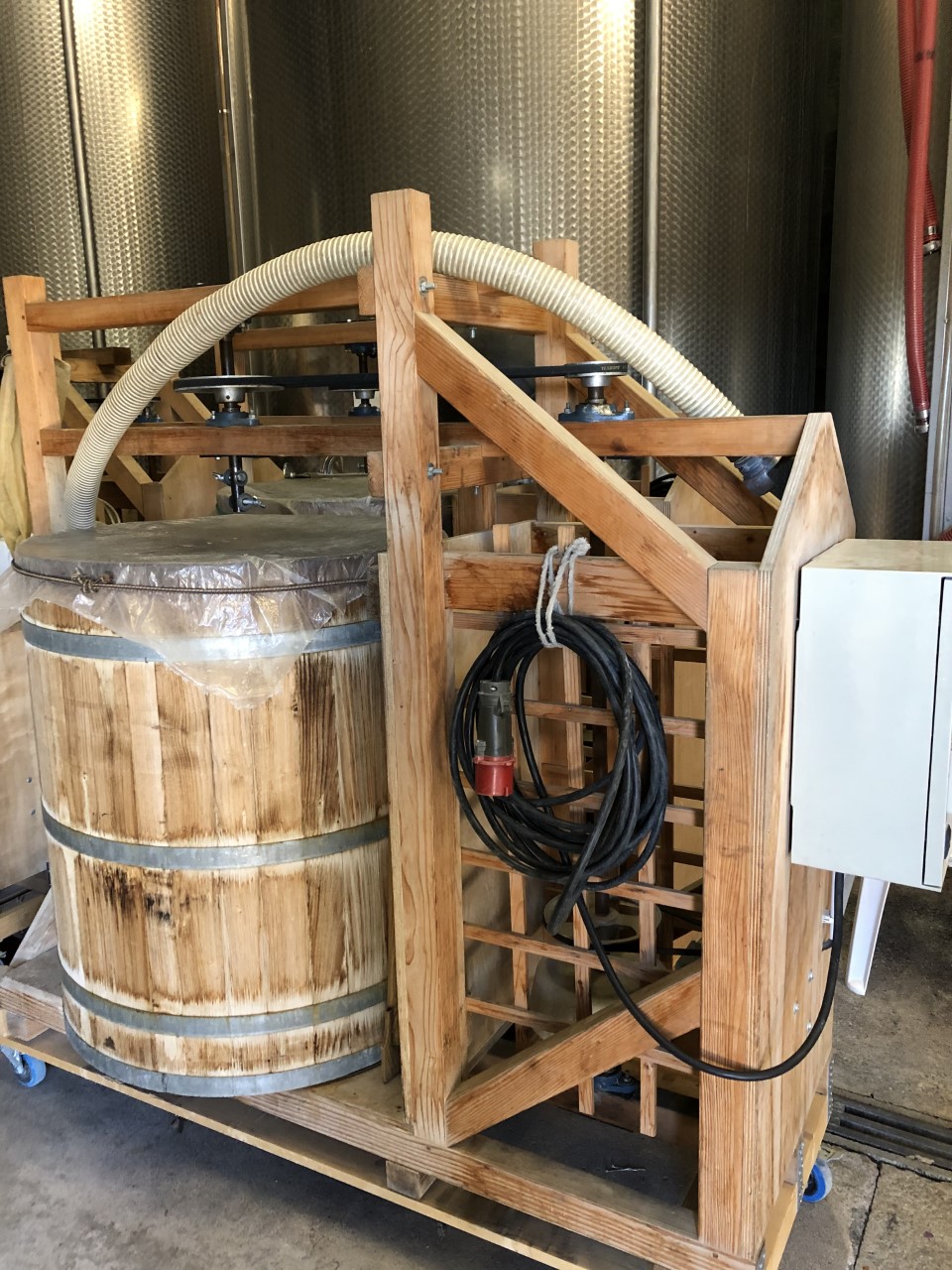 We made an Instagram post about the biodynamic at Domaine La Cabotte and how are the preparations are made : see you on our page @brunolafonselection !

In the winery, everything is done with gravity: no pumps are used to transfer the grapes to the tanks and the tanks are thermo-regulated. Fermentations are done with indigenous yeasts, and they work a lot with what we called “pied de cuve”, to avoid deviations and keep a balance in the flora. A “pied de cuve” is a wine in fermentation, used to inoculate another if the fermentation has trouble to start. The notion of balance is very important in wine, and is something that Eric and Marie-Pierre are seeking in theirs. They also use clay jars, with a slight porosity, which allows a very light micro-oxygenation, and other types to experiment, and see what is the result after an ageing. Bottling is done before the hot summer weather. 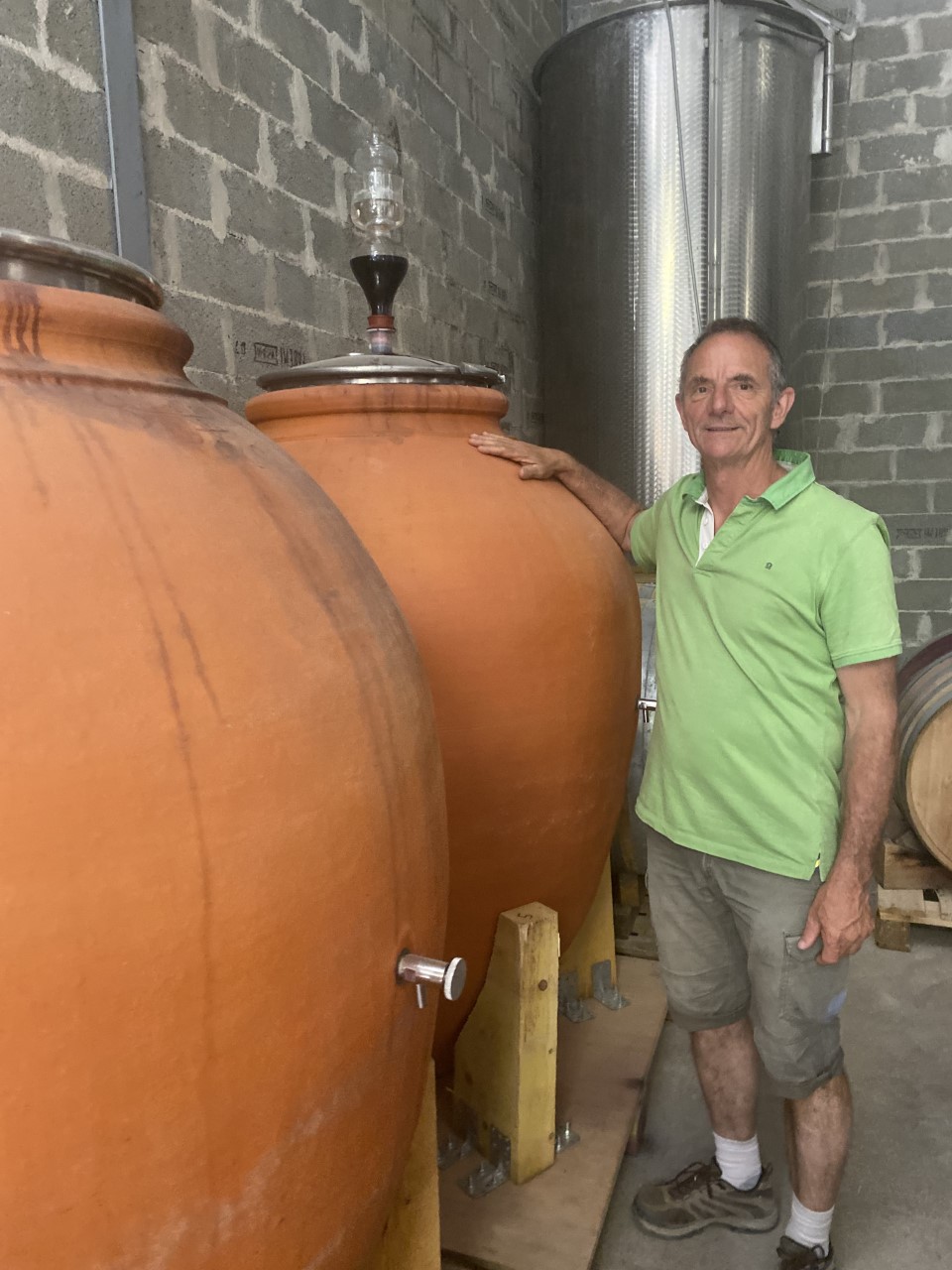 Another small particularity of the domain: geobiology! In order to work in harmony with nature, stones are placed in different locations of the domain, in order to make the energy circulate. Eric was telling us about two tanks, always the same ones, whose fermentations were permanently stopped. Since the arrival of the geobiologist, who was able to identify the energy nodes and who placed these stones, no more fermentation problems.

Very well balanced, soft but with character, the wines of Domaine de la Cabotte are part of this category of wines that leave a mark on your mind. If one day your path crosses the road of these, do not think twice, and taste them! You will never forget them. 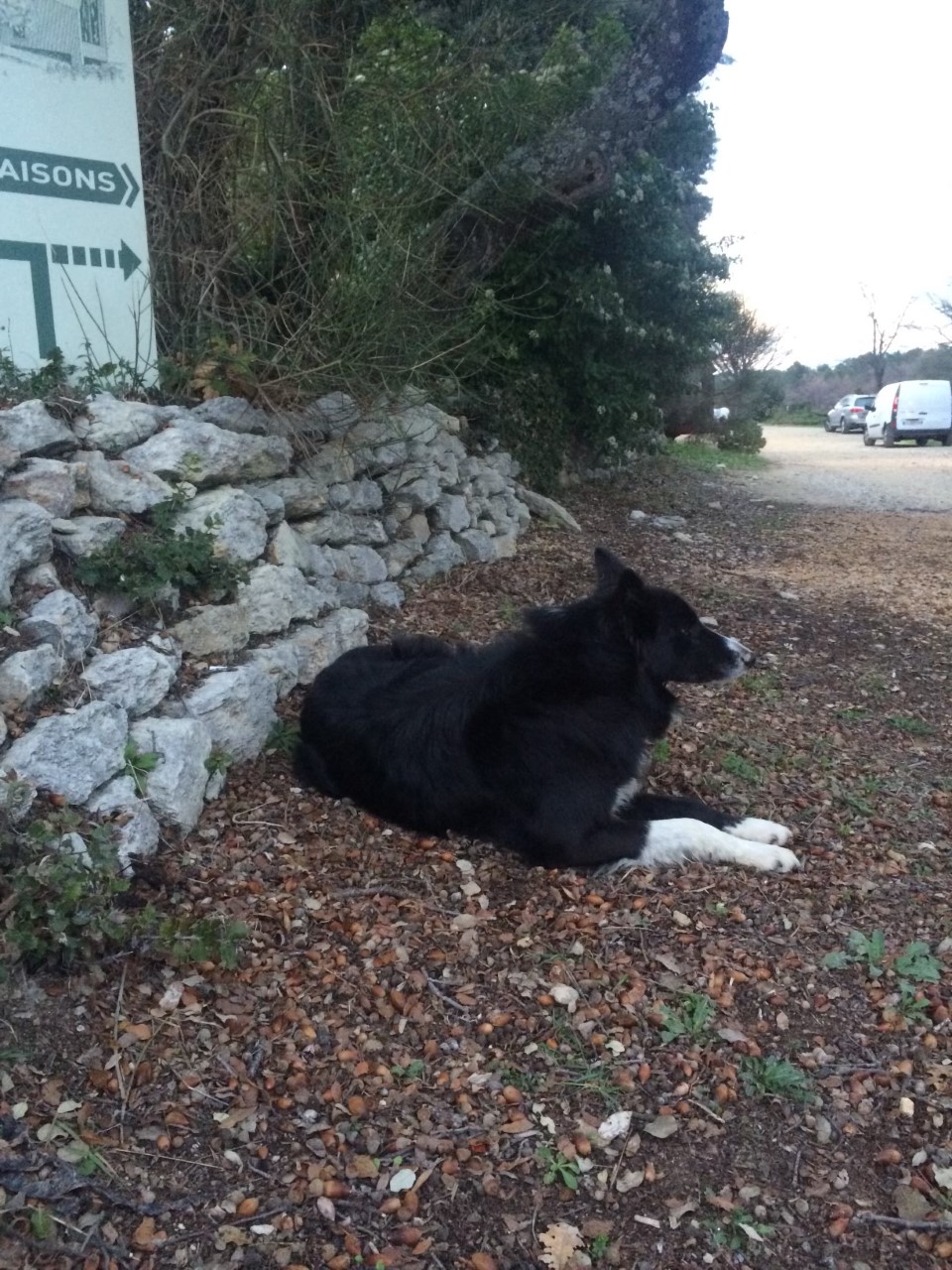 Meet their dog, who is also very useful : you can find a lot of truffles in this area of France, with the help of a dog, trained for that!