With Carlines discover the precise wines of Chalon, Jura's best

Today, we drove down to the Jura to meet with Sophie and Patrick Ligeron, wine growers and owners of Domaine des Carlines, since 2015. It is located in the charming village of Menétru-le-Vignoble which is part of the appellation "Château-Chalon", Grand Cru of yellow wines. When leaving Beaune, driving from the A39 road to the marvelous region of the Jura, it is like disconnecting with the fast-paced world and entering a quiet, yet beautiful and generous countryside. The hills, the green lands, the trees, and the vines are prominent. The old houses in stones are everywhere, and there you understand why Patrick decided to go back to his native region.

When the opportunity to take over 12.3 acres of vines emerged, it was like an evidence for this wine-lover couple who had been looking to start their own Domaine for a few years. In 2018, they acquired an additional 12.3 acres, which brings the Domaine to a total of 24.6 acres. Les Carlines now holds 10% of the total Château-Chalon appellation, which is quite unique! And the name we asked them… well “Carlines” was chosen in echo to the typical Jura flower. Patrick added that they wanted something representing the Jura and the Carline flower was an evidence for them, it’s like an homage to this region. 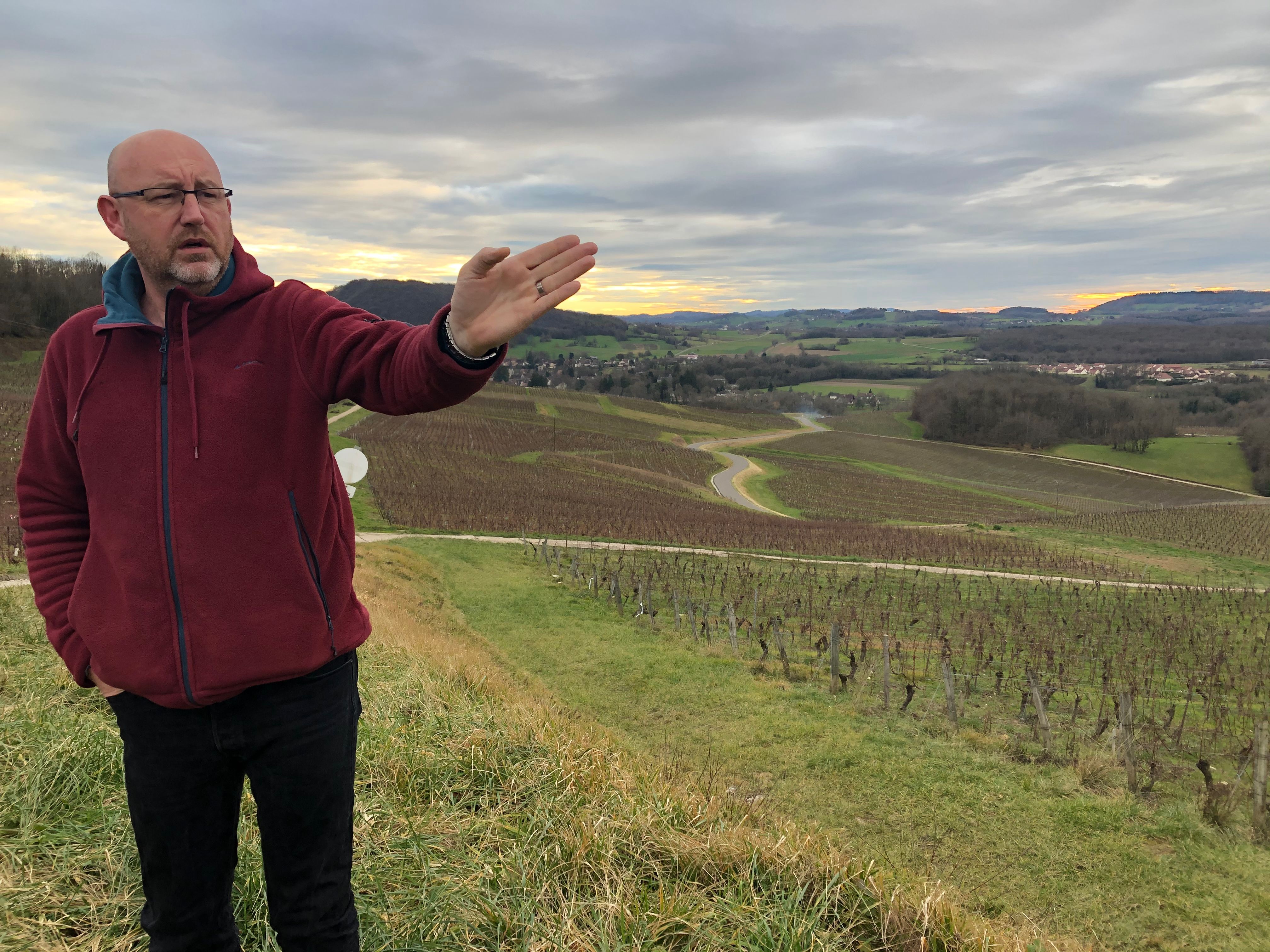 Just a few minutes after our arrival, we took a short drive up and down the hills to go check the different sites that compose their vineyard. Most are very closed to the Domaine, spread over the 3 villages of Château-Chalon, Menétru-le-Vignoble and Domblans, and located on the best plots of the Château Chalon appellation. Their vines average 30 to 45 years old and Patrick already started replanting some Savagnin 3 years ago to balance with the large proportion of chardonnay and to bring diversity to the vineyard. This new plantation is fully organic, situated in the hills with a north-east exposition. They keep the plots grassed to avoid herbicides. This choice is completed by a particular work of the soils which consists to guide the root system of the vines to the subsoil, most likely the grey marl that is a traditional subsoil of the region. It helps to extract the necessary minerals for the production of a great wine. 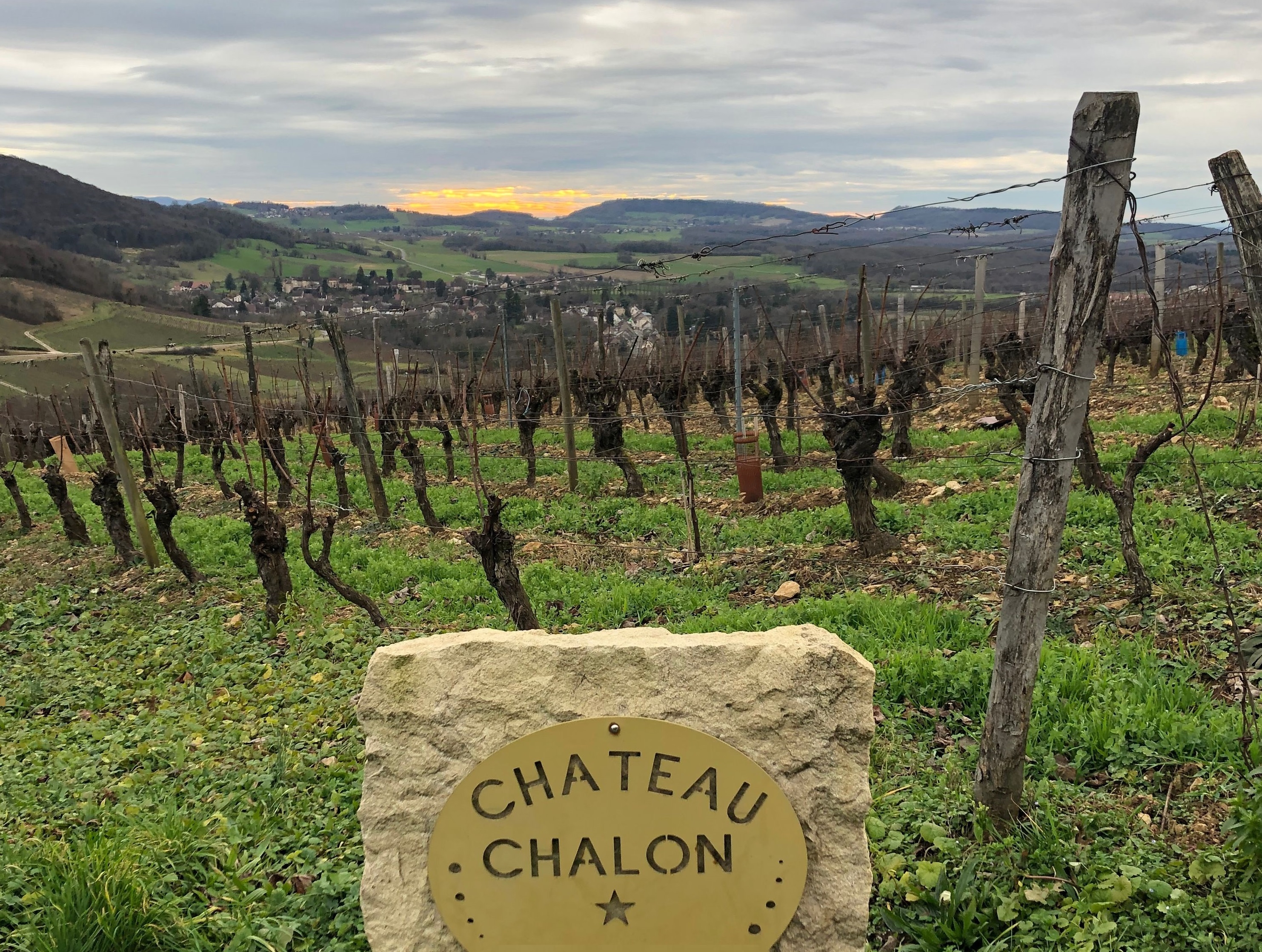 Now let’s take a closer look at their 7 plots, because each has its specificities, in terms of grape varietal, soil, exposure and altitude:

Calvaire with an area of 3.9 acres is made of Chardonnay. Exposed to the South-East at an altitude of 320m, this soil is composed of Marne Grise du Lya with sedimentation of clay and sands.

Trémoulette is composed by Chardonnay with an area of 3.2 acres. It shows a west exposition and an altitude of 250m. Its soil is composed of Marne Grise with mainly clay sedimentation.

En Lya, counts 2.47 acres of Chardonnay. It is exposed to the west and is at an altitude of 320m. This parcel is part of the Château Chalon appellation. Its soil is composed of Marne Grise with sedimentation of limestone silt on the surface. It also counts a plot of Poulsard, a red grape variety emblematic of the Jura, planted in this same terroir with an area of 0.5 acre.

Gaillardon is co-planted with 50% Chardonnay and 50% Savagnin. It covers an area of 4.5 acres in the Château Chalon appellation. It is exposed to the West and located at an altitude of 340m. Its soil is composed of Marne Grise with limestone sedimentation on the surface.

Derrière l’Eglise is a 1.2 acres plot of Chardonnay. It is exposed to the west and is at an altitude of 450m, the highest of the plots. Its soil is composed of Marne Grise with limestone sedimentation.

En Beaumont is full of Savagnin and counts 1.2 acre. It is South East exposed and lies at an altitude of 300m. Its soil is composed of grey marl with clay sedimentation.

Finally,En Charnay is composed of Savagnin and is 2.8 acres big. It is South East / South exposed and lies at an altitude of 400m. Its soil is composed of grey marl with clay sedimentation.

They also have a succession of smaller plots, Marronnier, Le Pêcher, Bas de Lya, La Côte planted with Chardonnay, Savagnin, Pinot and / or Poulsard, which are too small for a plot, but which fit into their blending cuvées like the Vouivre, Pinot Noir and Poulsard.

After a good two hours in the cold of a Jurassian winter, Sophie and Patrick took us back to the cellar. All their harvest is hand-picked to guarantee a good quality of the berries, and the grapes are hand destemmed with the little “cagette” they use to avoid any damage on the berries. Pressurage is done immediately after the harvest and received in vat for a settling of 24 hours. The must is then introduced into Burgundian barrels that are at least 3 years old. Fermentation and aging are done in the barrels, on fine lees for about 18 months.

During the aging, Patrick makes sure to top off the barrels, generally twice a week to prevent the development of haze and any oxidation. This process is what we call the “ouillage”, the winegrower fills the barrels to avoid the development of bacterium that the oxygen could bring. He chooses to use this technique on the majority of his wines because he considers that it allows the terroirs, the soils and the aromas to express the best of their characteristic. The other wines, do not beneficiate of the ouillage like his “vin de voile”. This one, also called “vin jaune” (yellow wine) has a really specific way of wine making process. Indeed, this typical jurassian wine is characterized by the development of yeasts, forming a veil on the surface of the wine due to the contact with the oxygen in the barrel during the ageing. The wine has to stay 6 years and 3 months into the barrels before to be bottled and give a golden aspect to the wine which explains the origin of its name. Patrick uses this process for his chardonnay, especially in the Château Chalon Grand Cru AOP that authorizes only the production of “vin jaune”. Another specific wine the Jura Region offers is “vin de paille” (staw wine) that doesn’t beneficiate neither of the ouillage technique. This sweet wine is made from berries hand harvested among the first one of the harvest season. Once they have been collected, they will be dried by suspension during three months before the fermentation. The aim here is to concentrate the sugar into the berries to produce the sweetest wine possible. Even if Patrick follows the mains steps of the “vin de paille” making process, he has chosen to declassify these wines in Vin de France appellation instead of the AOP Côtes du Jura. The technical specification the AOP involves as the percentage of minimum 14% alcohol can’t be achieved with a natural fermentation process. The wine produced is as good as the Appellation requirements, maybe even better! 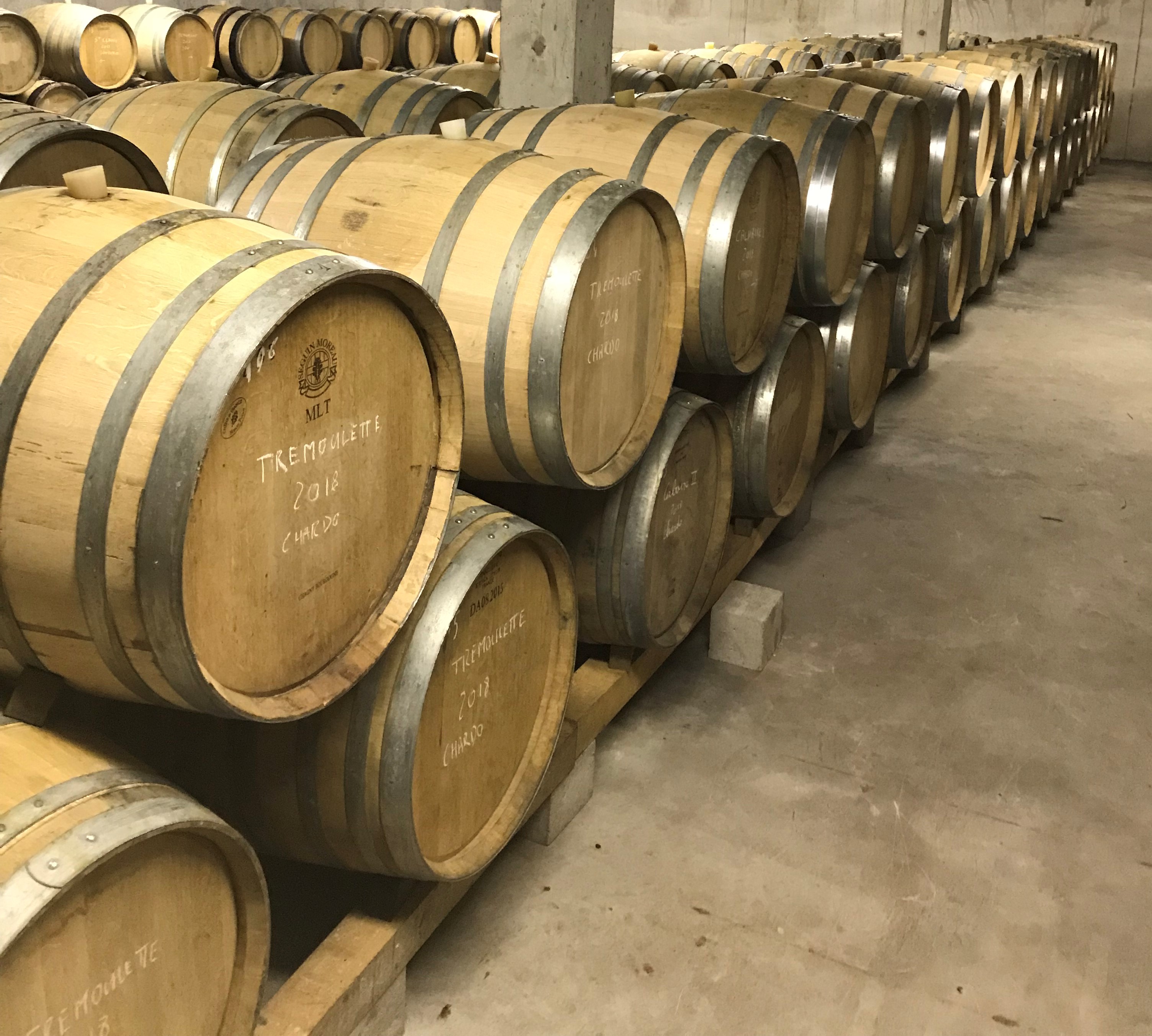 The barrels are racked at the end of aging, respecting the plot. Each cuvee is then kept in a stainless-steel tank for an additional 3 months in order to harmonize. Bottling is carried out without filtration, without fining in order to respect the expression of each terroir.

It’s quite impressive to see the dedication and the meticulous work done by Patrick and Sophie. They do their best to respect as much as possible the berries and they apply this same way of work in their culture of the vineyard too. To our opinion, they vinify what we bet, may be some of the best future Jura wines in the region. Every step, from the vineyard to the bottling, is thought in a respectful, passionate and dedicated way that we can find once we taste their exquisite wines. We highly recommend that you extend your French visit or make a little detour from Burgundy to go visit Sophie and Patrick at Domaine des Carlines! You won’t be disappointed and if you’re lucky, you may get a sit at their table… because there is another secret here… Patrick is a talented Chef!! We got spoiled to taste his “poulet aux morilles” (morrells chicken) and enjoy some old Comté with his Jura and vin jaune!